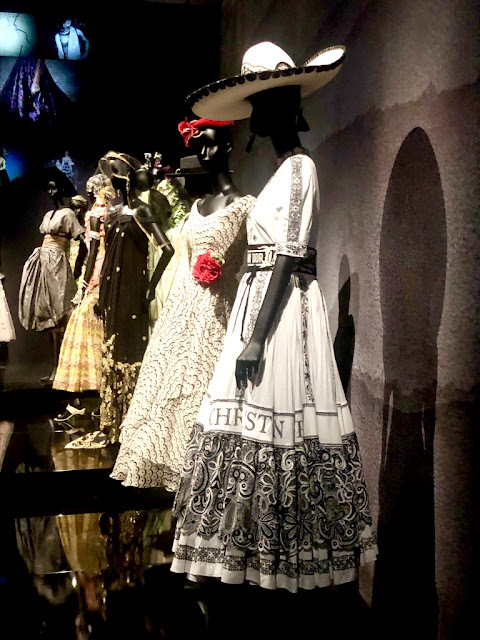 There are so many wonderful and exhibits here in London, you could spend ALL day EVERY day at the museums and you wouldn't see them all. And yes, the museums here really are free, which I know it's hard to believe.

But within these amazing free museums, there are often special exhibitions for which they charge entry admission. (I've listed some of London's hot ticket art exhibits at the end of this article)
And then there is the Christian Dior exhibit.

The "Christian Dior: Designer of Dreams" exhibit at the Victoria and Albert Museum completely sold out their eight month February-September 2019 run within 2 weeks of opening, and it is set to be the V & A's all time most popular exhibition. 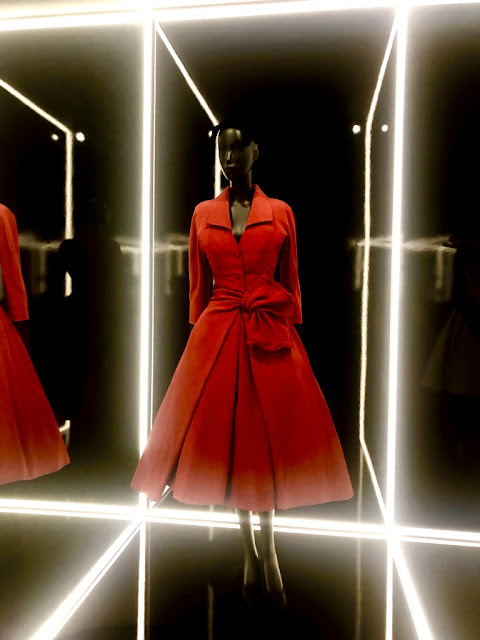 Obviously, I wanted to go. My background is in fashion, and I once did a presentation on Dior's New Look. So I got on my laptop the First of January to make sure I got a ticket.  The first date I could get was Monday, May 14th at 4:15pm. SERIOUSLY??? So I booked it. 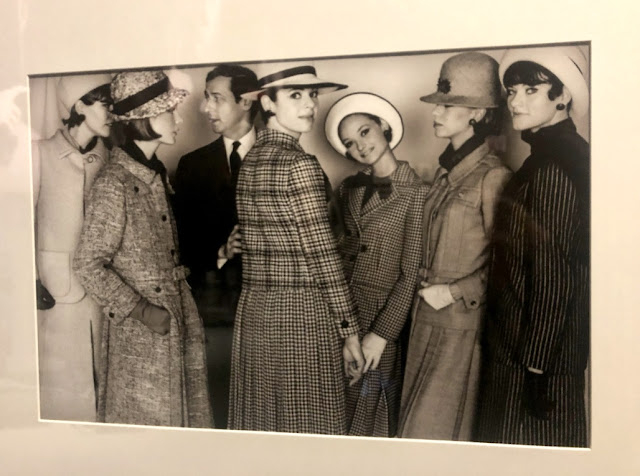 But then someone told me a little secret... an expensive secret, but well worth the price if you really want to go to a sold out exhibit. Simple- just buy a yearlong museum membership! Then you may go any time and as many times as you wish, to any of the exhibits, usually without having to make a reservation, and you can bring a guest, for a full year! So yes, totally worth it in my book.

So, yesterday, my friend Jane and I tubed down for a little outing at the V & A. Yes, it was very crowded, but we got in and although we were prodded and shoved a few times (really!), we managed to get in. Crowd or no crowd, the exhibit is not to be missed, if for no other reason than to get a glimpse into the mind of one person who changed women's fashion forever.

The Christian Dior: Designer of Dreams" exhibit traces the 71 year history of the House of Dior, from its beginnings in 1947 in Paris, at 30 Avenue Montagne, where it resides to this day. Of note is that Dior's first London show was held in 1947, and that he opened Christian Dior London in 1952. 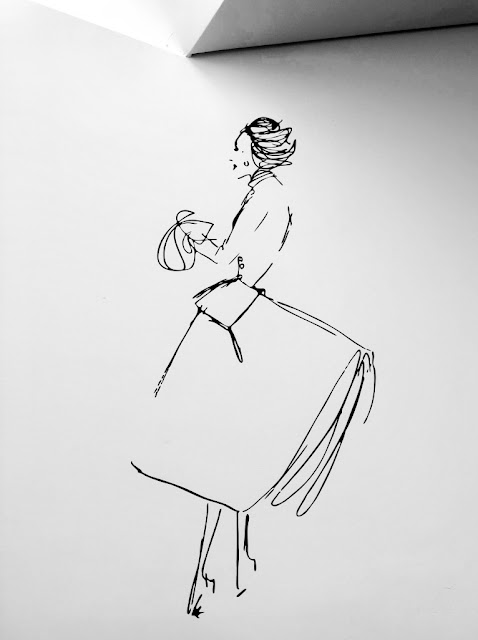 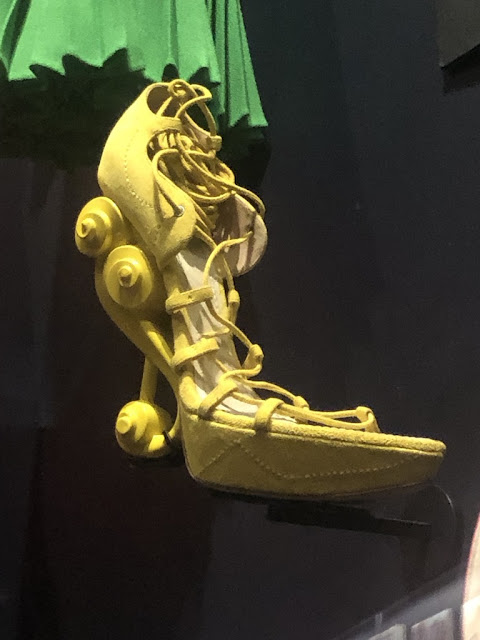 The curators explore the relationships that Dior had with world travel  (Africa, Asia and South America are particularly featured)... 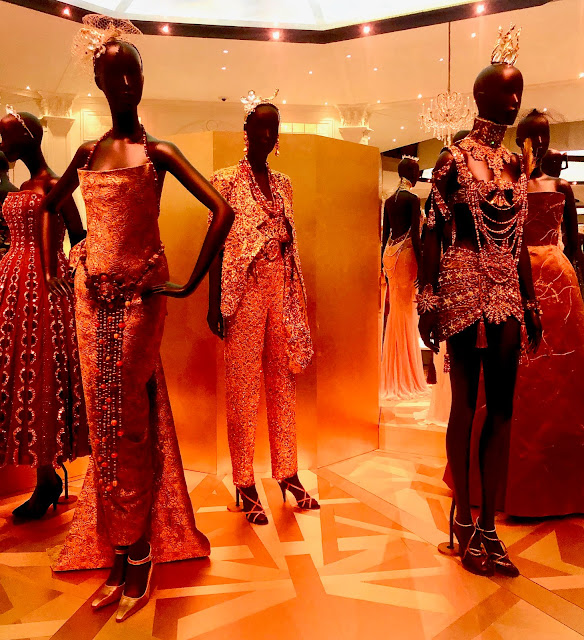 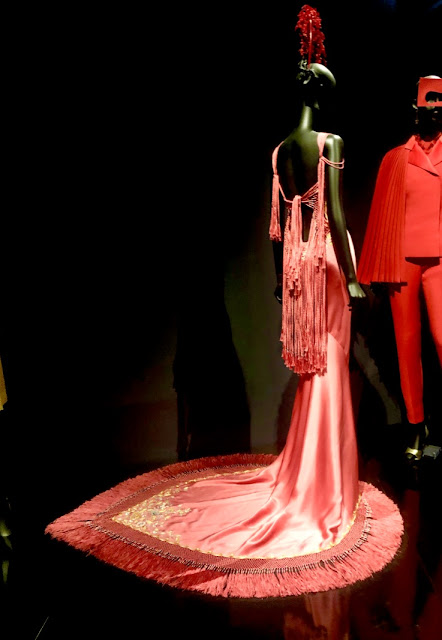 ...as well as flowers and the female form (obviously). Dior once famously said, "I have designed flower women" and that is truly apparent, particularly in a room in which features floral dresses, as well as cut paper flowers suspended in a spectacular ceiling display. 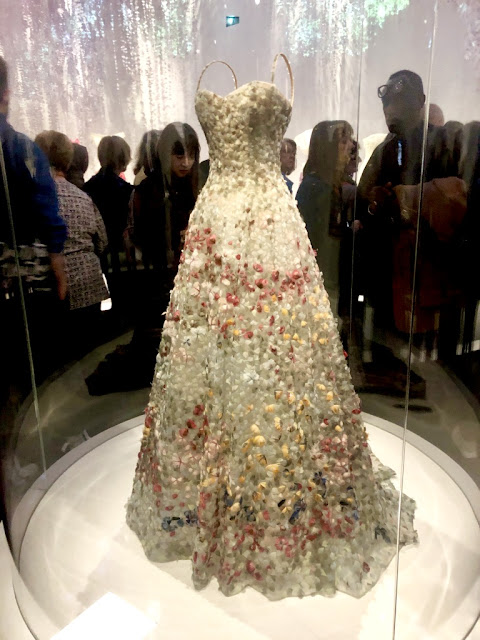 Some of the highlights of the show include the first room featuring Dior's New Look, and how it has been reinterpreted over and over through the years.

The exquisitely lighted "Ballroom" features formal evening wear, special dresses which you may recognize as worn at red carpet events like the Oscars. 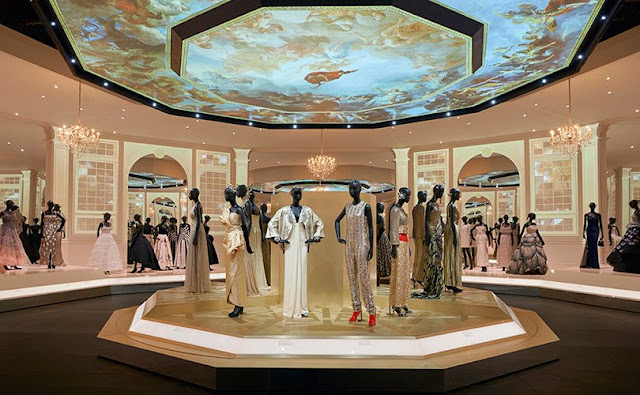 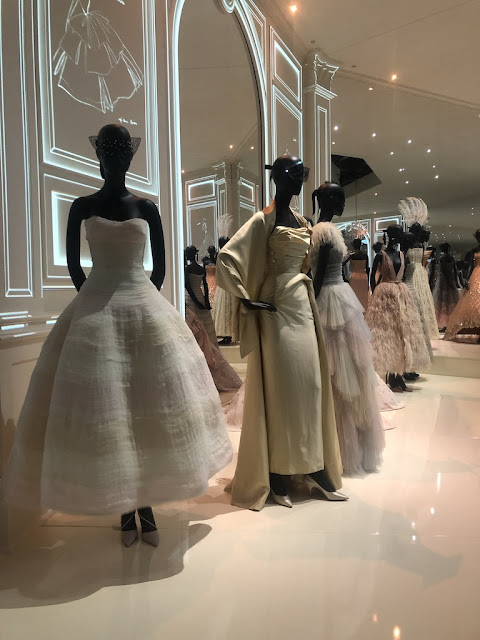 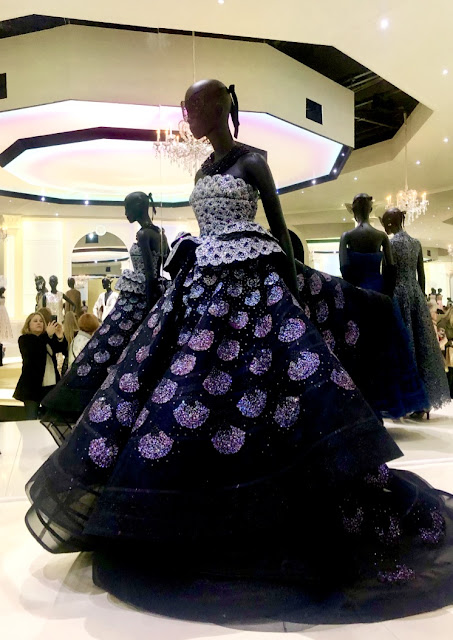 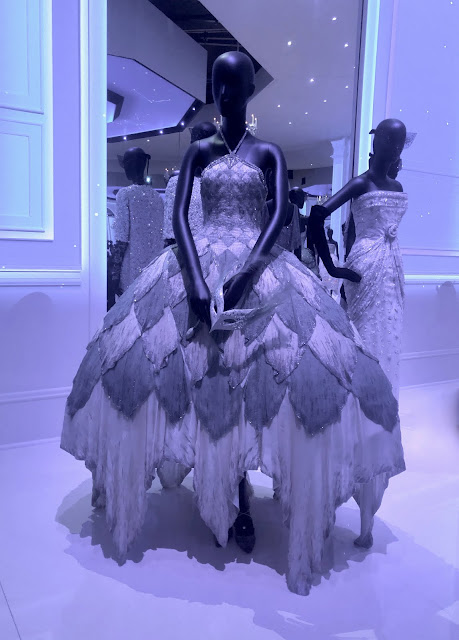 The Diorama room pays tribute to those who have created accessories for the Dior line. 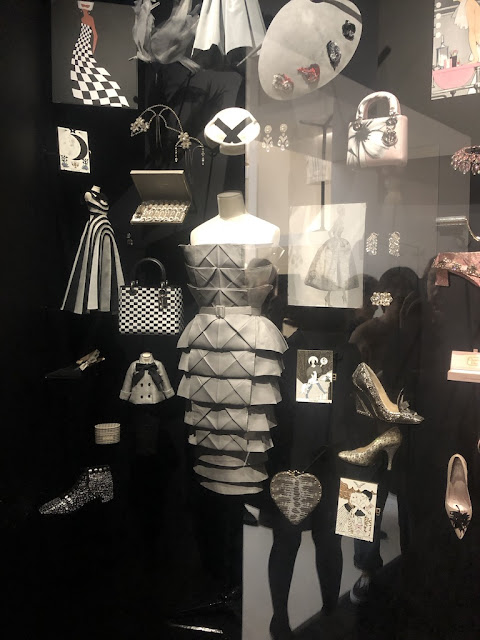 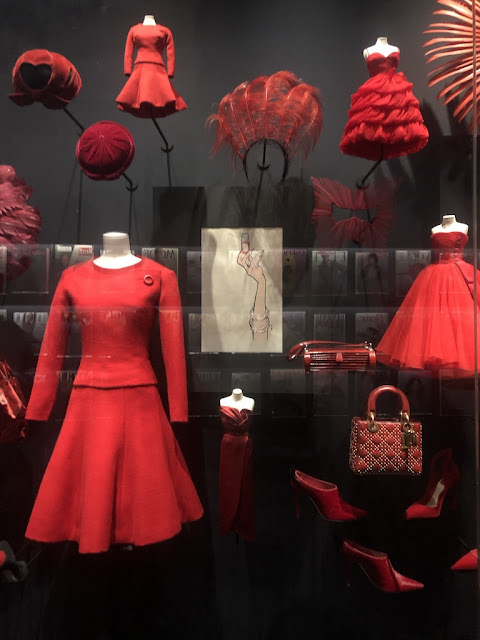 The Designers for Dior section showcases the 6 Creative Directors who have been at the helm of Dior since his untimely death in 1957, at age 52.

I loved the Atelier Room, featuring 100 ateliers from floor to ceiling. These are dress bodies created by pattern makers in cotton muslin, prior to making the actual gown. All are in white. 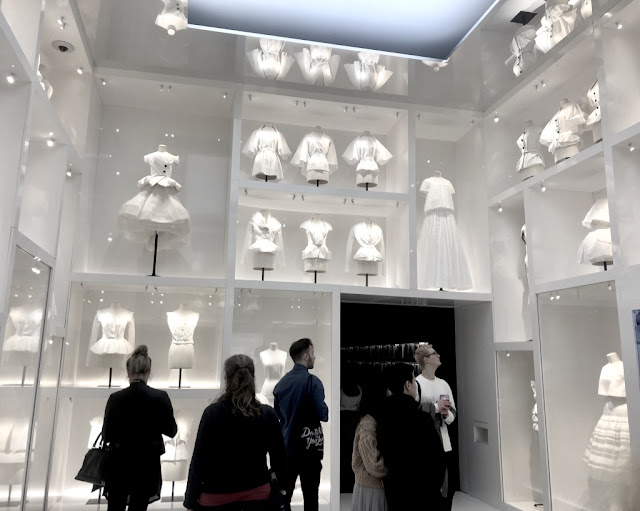 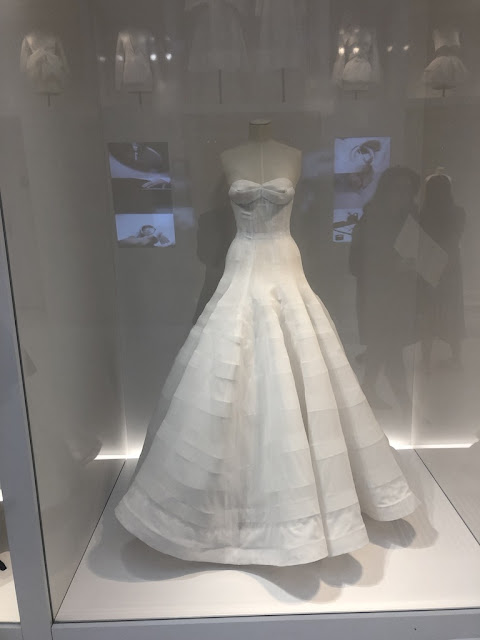 After experiencing this exhibit, I can certainly see why "Christian Dior: Designer of Dreams" has captured the hearts of fashion-minded London. Here is a man who celebrated women, empowered them, and worshipped them. Christian Dior changed fashion forever, and we are very fortunate indeed to have the chance to see these timeless designs at the Victoria & Albert museum.

By the way, if you have the time while you are at the V & A, do peek into the cafe. It stands as it did in Victoria's time, with very few changes (ok, maybe the lighting), and is glorious. I'm not sure I fully recommend eating lunch here. But the opportunity to sit in this room might be worth the high price and the just so-so food. 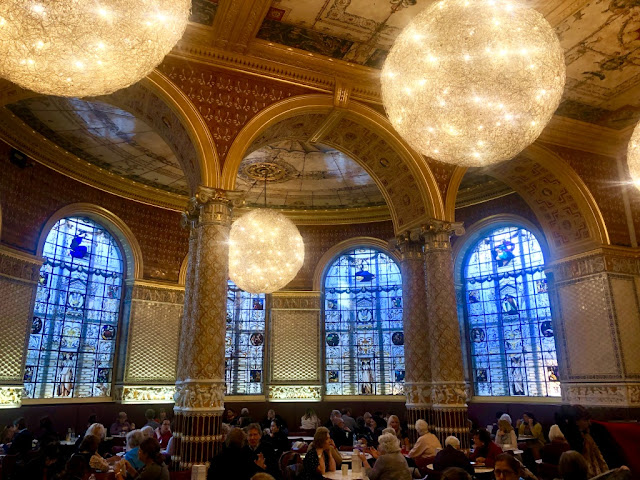 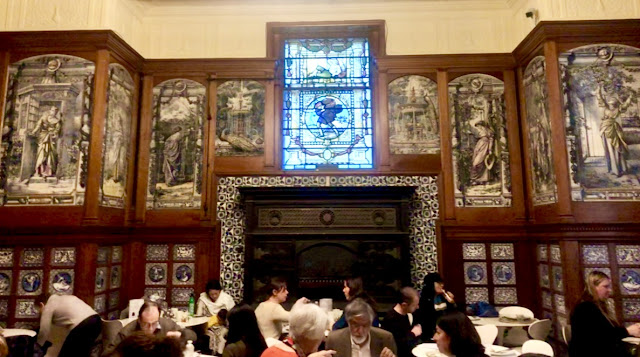 Oh, and check out the wonderful tiles in the toilets, with Victoria's initials on them! 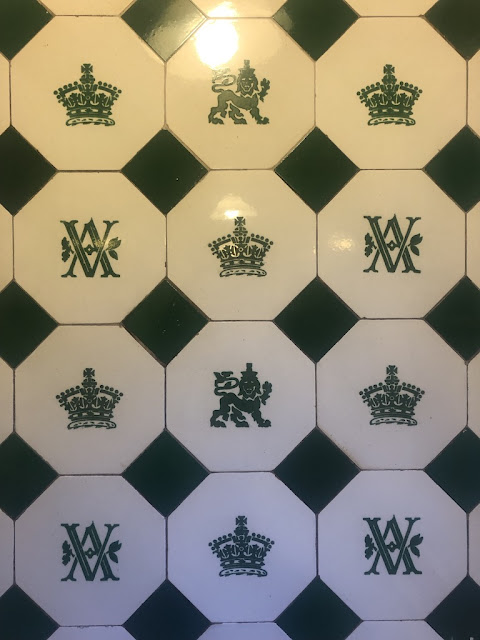 As promised, here is a listing of some of the hot ticket exhibits coming to London in 2019, most of which will require an entrance fee, and most certainly an advance booking:


Christian Dior London Christian Dior: Designer of Dreams Dont miss in London London top things to do V & A Victoria and Albert Museum hot tickets What to do in London
Location: London, UK