A few hours at St. Katharine Docks, a secret in plain sight! 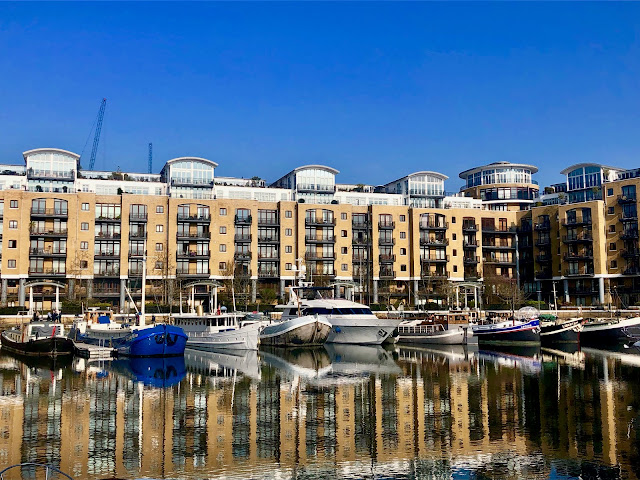 It's a beautiful Saturday,  perfect for taking a walk across the Tower Bridge and exploring Saint Katharine Docks!

They say that often the best kept secrets are hidden in plain sight, and St. Katharine Docks is no exception!  St. Katharine Docks is a delightful boat harbor on the east side of the Tower Bridge, tucked into the shadows of the Tower of London and the Tower Hotel. Most tourists don't even see it, but walk through its path and you will find sail boats, "pirate" ships, the Queen's own Gloriana barge (docked here April through November), as well as a myriad of great restaurants in which to while away the day.

To enter St. Katharine Dock, let's walk along the bank in front of the Tower Hotel. It's Saturday, so all of the World Food Market Vendors are here, offering samples and wonderful street food. 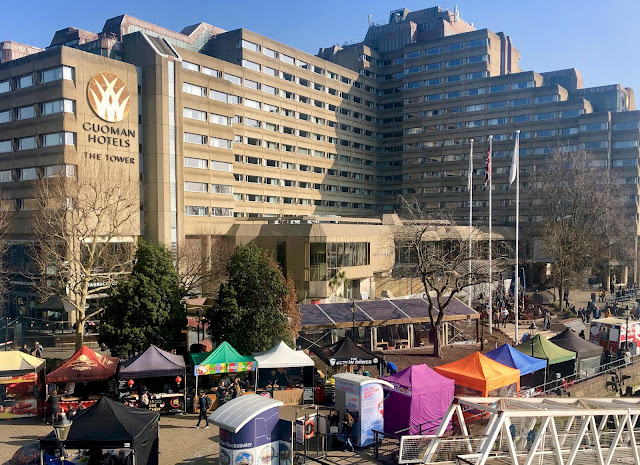 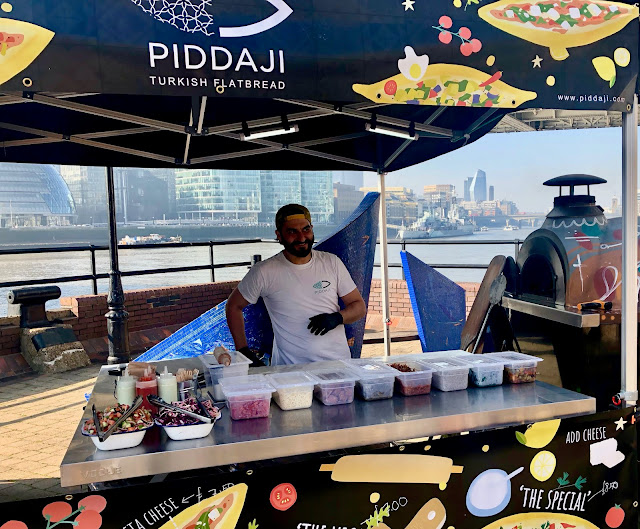 As well as having a gorgeous view of the river, the Docks are home to various outdoor art sculptures, like "Girl with a Dolphin", by David Wynne. 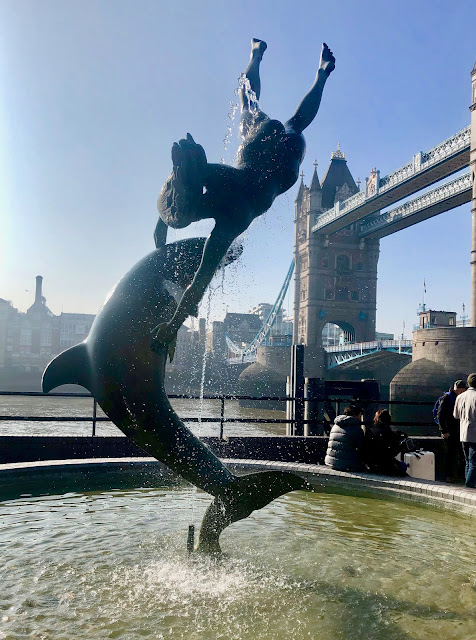 Proceeding along the bank, you will come to St. Katharine's Lock, a chamber which raises and lowers the level of the water between St. Katharine Docks and the River Thames for the yachts as they come and go.  With any luck, you will see it in action, but not this morning--the tide is very low, so the boats would have quite a difficult time getting past the mud on the river bank! 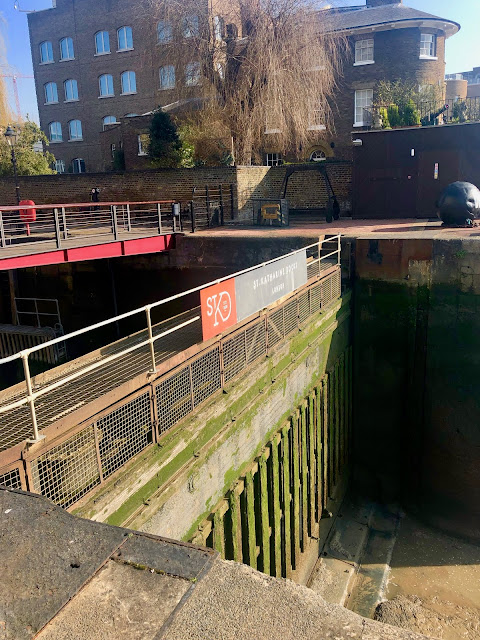 What, you say? It's a river, not an ocean! how can there be tides? The River Thames is a tidal river, which means that twice every day, the tide goes in and out, changing the river's height by 5-7 meters (and up to 25 feet). They say the river flows both ways, and in some ways that is true--the river flows with strong currents upstream when the tide is rising.

So, don't ever think about a swim in the Thames here in London-- The current can reach up to 6 knots, which is faster than Michael Phelps' world record! 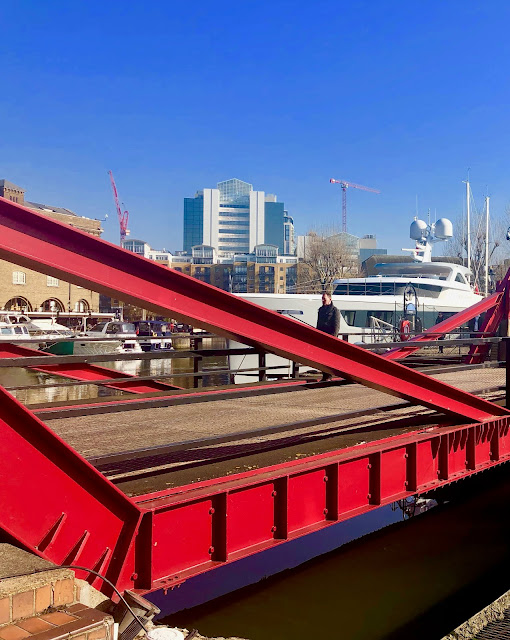 From here, we will cross the red-grated bridge into the Dock area, and meander among the myriad of charming yachts. There are three distinct bodies of water, the West Dock, the East Dock and the Central Basin and it is well worth exploring all three. 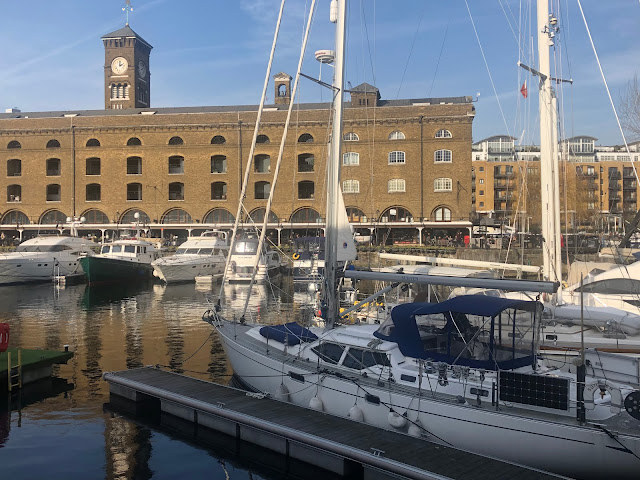 Let's start to the right, and venture into the East Dock area, where The Dickens Inn pub holds court, as one of London's most picturesque pubs! (Also on this side is Mala Indian Cuisine restaurant.) 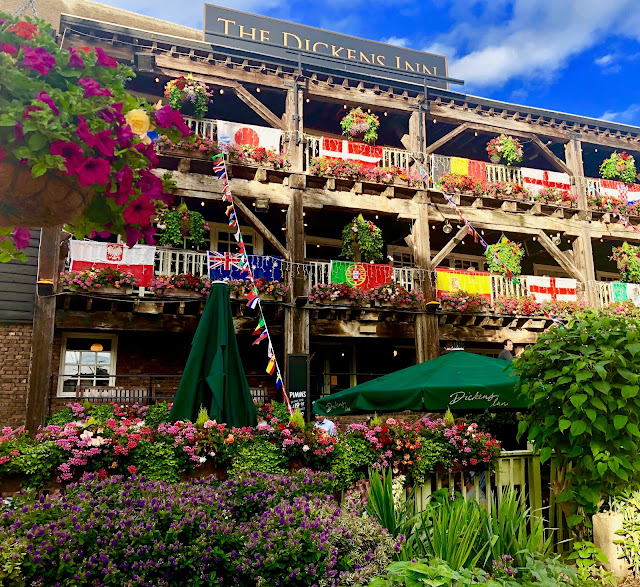 Unlike practically every other old pub in London, The Dickens Inn does not claim to have been frequented by Charles Dickens, even though it is named after him.  This pub was built in the early 1800's on the waterfront. Later, when the town council earmarked the location for residential living, the pub was moved to its current location, timber by timber!
Now, for an added surprise peek, that just about nobody ever sees, take a look just behind the Dickens Inn (on the right side) for a great example of some beautiful old homes with no exterior foundation--they meet the water at the wall's edge. 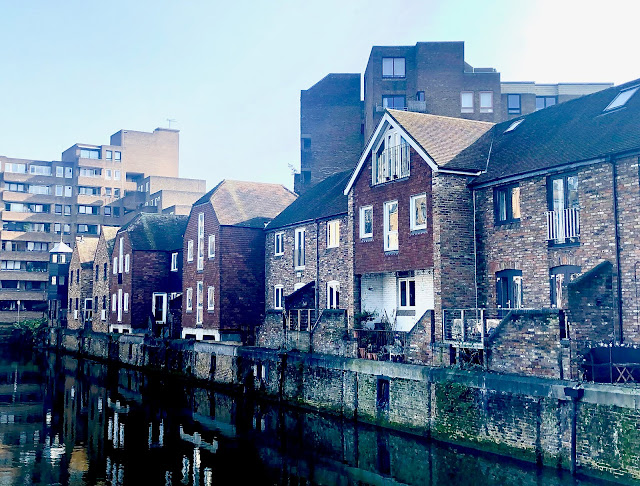 It's a good time to talk about the history of St. Katharine Docks. This is an area steeped with an  intriguing past,  tracing its roots all the way back to the 10th century! King Edgar gave this land to a group of knights, and  beginning in 1148, it was home to St. Katharine by the Tower Hospital and Church.  The alchemist Raymond Lully also lived here while he was employed by Edward III  to discover the secret of transmutation.  Henry VIII and Katherine of Aragon founded a guild here, and the area grew to include a court, a prison, factories and housing.

In fact, the area was home to 11,000 people by 1825, when they were all unceremoniously kicked out of their homes, in the name of redevelopment. By 1827, the area was known as St. Katharine Dock, and was a center for trading vessels transporting wine, rum, brandy, spices, ivory and marble. Even today, you can see the two historical elephants guarding the gates on the St Katharine's Way entrance. But life as a shipping dock soon faded, as larger ports attracted grander vessels, and trade dwindled. The docks were heavily bombed in World War II, and the area was closed completely by 1968, developing over the 1970's and '80s as the multi-use housing, entertainment and office area that you see today.


Coming back from our history lesson, we cross over the footbridge and it's again time to eat!  We enter the Middle Basin area, and there are loads of wonderful restaurants to choose from, like White Mulberries (known for their coffee and great breakfasts), Dokka Kitchen (asian inspired beautifully presented cuisine), Emelia's (italian) and Zizzi (pizza and pasta). 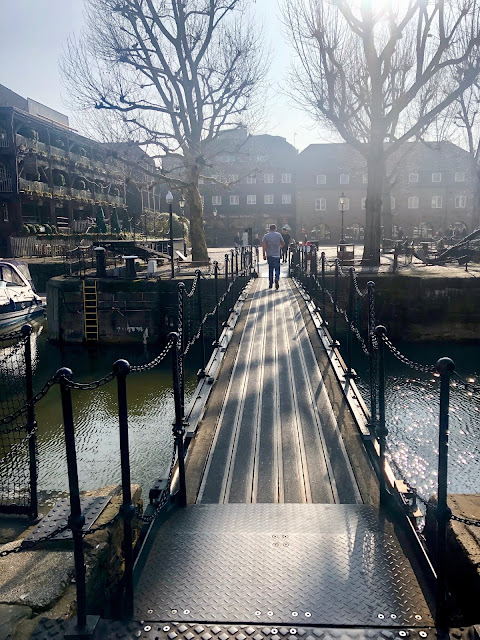 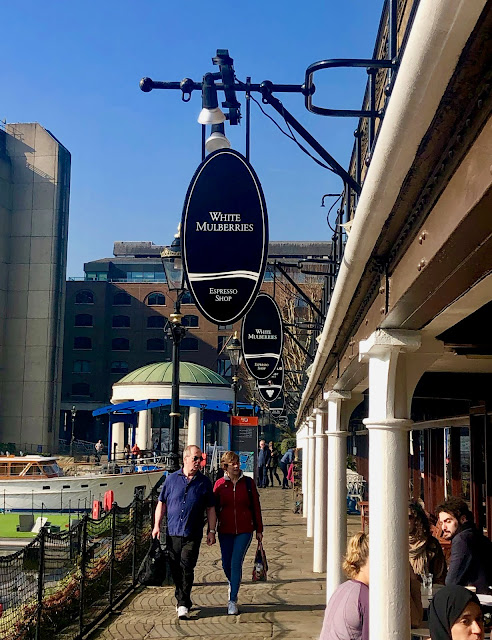 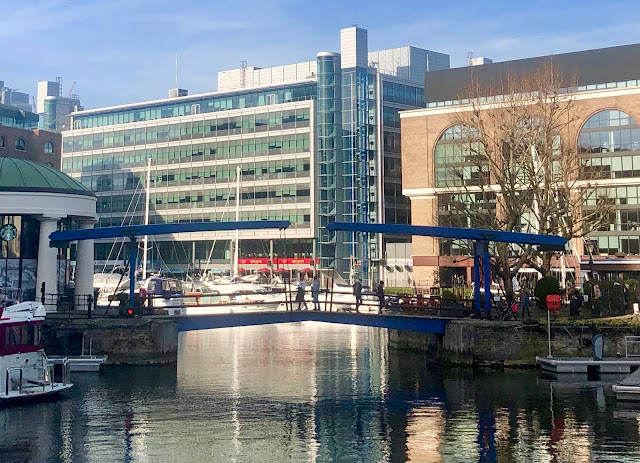 But we have more to see! Sneaking through a passageway between Trader's wine shop and Kilikya turkish cuisine, we pass Bravas Tapas (rustic basque cuisine) and Ivory House, and turning left, we enter the West Dock area. 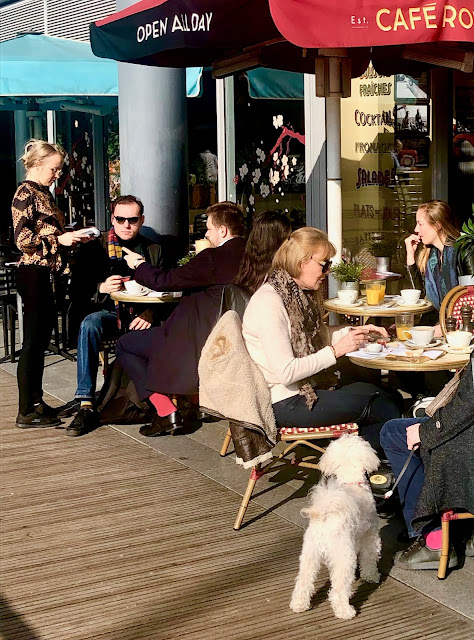 Here, there are sooo many choices for a drink or a bite: Natural Kitchen (healthy choices), Ping Pong (Asian Dim Sum), Strada (Italian), Cafe Rouge(French Bistro)and Cote Brasserie (french brasserie). All of these are chain restaurants, and very popular for their outdoor seating on a sunny day like today. 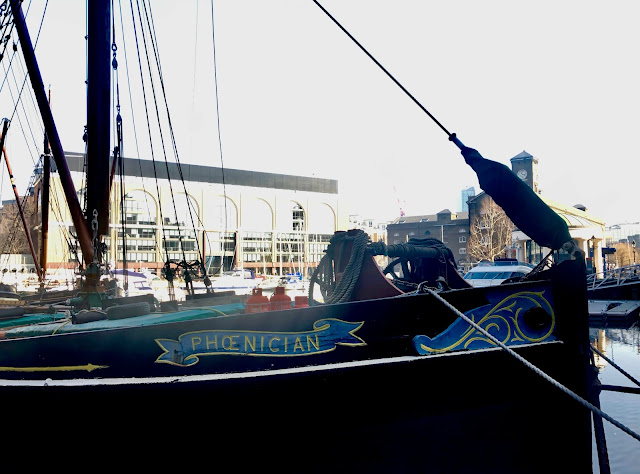 After a nice meal and drink at one of these amazing choices, we walk along the dock in front of the Cote Brasserie, past some of the great "pirate" ships (take a right at the end of the dock and you will be back along Tower Bridge Road, directly across from The Tower of London.) 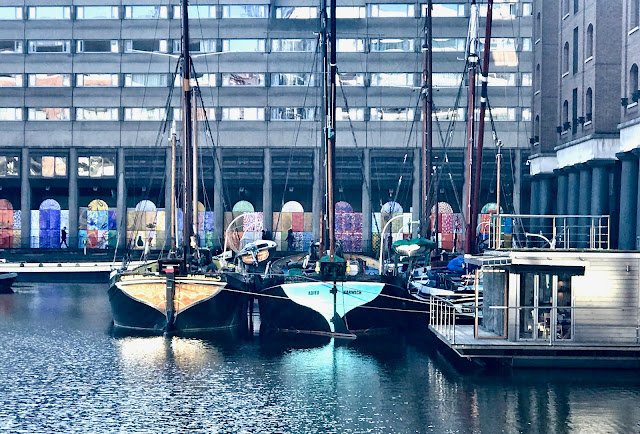 The sailing barges you see in front of you used to carry cargo, and you can even take a ride down the River Thames on The Lady Daphne, from May through September (www.lady-daphne.co.uk).

Hope you enjoyed our diversion into the hidden London setting of St. Katharine Docks!