We were meant to be in this spot

There are moments in life that give you chills, skin prickles, goose-bumps, heebie-jeebies, or whatever you personally call the experience.  For us, moving to this particular flat was one of those moments. For me, it was a sign that we were supposed to come to London, and further, that my mom was still watching over me.

When we had a strong inkling that we were moving to London, but still couldn't tell anyone, I started cleaning house. I went room by room, donating what I could, and boxing things for storage.  I had been putting off going through some of my mom's things, which my sister, Carol, had shipped to me.

Finally making the plunge,  I opened the first box of my mom's possessions, and pulled out a slide projector, some reels and a box of those old metal-trimmed slides from the 50's. When I opened the box of slides, the very first slide that I pulled out was this one:


Dead serious. The first one.
I definitely took this as a sign that we should move to London, and that my mom approved.  I pulled out more slides. There were probably 20 from London, and more from Germany, France and Italy, which chronicled a trip she took with her friends across Europe in the summer of 1952, before she moved to Alaska.

When we got the nod that we were indeed coming here on assignment, I had 5 of the photos framed and they are currently hanging in our flat. But the story gets more interesting from here.

Previously, I had been scoping out London apartments on the various property rental sites, and thought it would be amazing (being inspired by my friend Erin who lives on the water, and looks out on downtown Seattle) to live on the River Thames (yes, you have to say River Thames, not Thames River) . We heard that properties on the water didn't come up very often, and went extremely quickly. Jeff took an advance trip here, found out that there were zero properties available and then, heard from a cab driver that the area was sketchy. So from jeff's security view, that was that. Moving on.

But still, I had alerts on my phone for properties on the water, and the night before we saw the estate agent to look at rental properties, one came up along the river. The agent added a showing to the very end of our day, and the rest is history. We loved it, and made an offer, and moved in July 26th.

[And yes, weirdly, here you need a realtor (called estate agents) to rent an apartment (called a flat). And you negotiate, just as you would if you were buying a home in the USA.]

But it wasn't until we moved in that we realized that the photo which my mom had taken in 1952 was of our EXACT building. We know this, because after we moved in, we saw, in the lobby downstairs, another historic photo, taken from the same spot, from the same time period.

So, now, with just a few more of my arm hairs tingling, I can say that my mom is definitely looking down on us here, and
this move was meant to be.
💖💖 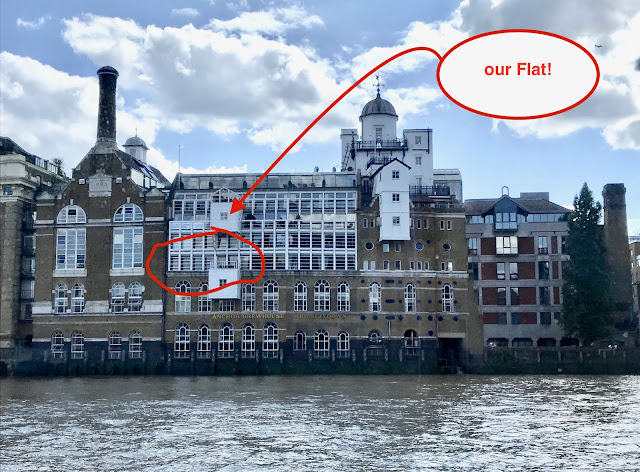